What happens to aquatic creatures when ice freezes over?

As winter arrives, we get out coats, turn on furnaces and complain about the cold, snow and ice. We even think of our pets, putting them in coats, bringing them inside or getting an extra blanket.

But what about creatures in the wild? Specifically those that live in stream, lakes, ponds and rivers that have the potential to freeze? Aquatic organisms have come up with several adjustments to meet these challenges. 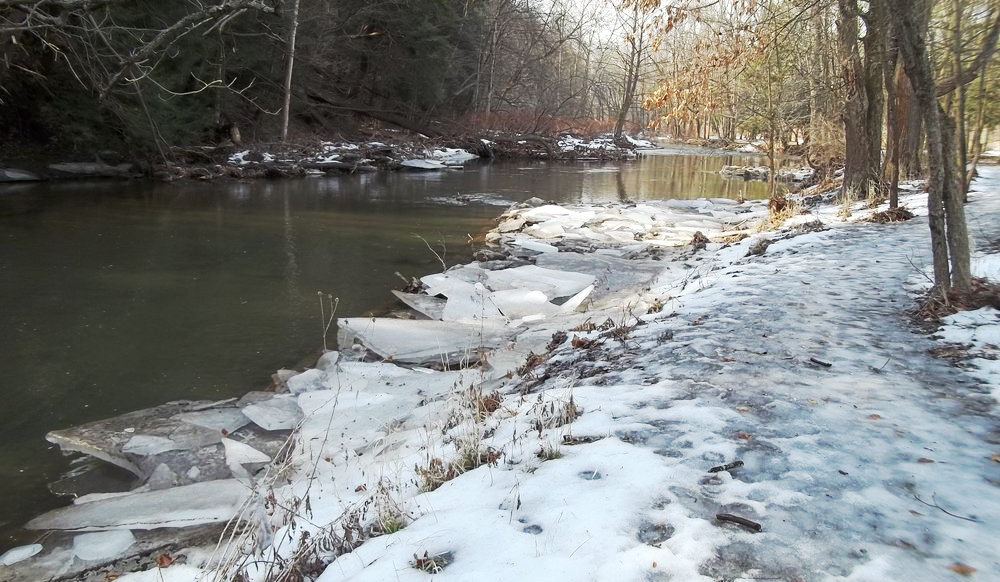 Some species of fish known as cold-water species, like trout, perch, and salmon prefer the colder temperatures, as colder water has more oxygen, but they will still move pretty slowly when water temperatures drop below 40°F. Other fish species, known as warm-water fish, such as bass, bluegill and catfish, must hibernate. They retreat to the edges of streams and bury themselves in mud or leaves to wait out winter’s wrath.

Some species have been known to come back to life after being frozen!

Fish aren’t the only organisms in our streams though, macroinvertebrate or stream insects have some unique adaptations to survive the winter. Like a lot of our warm-water fishes, aquatic macroinvertebrates will burrow into the mud, leaves or other stream substrate til spring. Many insects can also secrete a fluid similar to antifreeze to survive the cold.

Other organisms in water? Snails become very inactive in winter. Those present in water that freezes solid, burrow into mud and plant debris to hibernate. Mussels become dormant, too. This is evident from the darker rest rings on their shells, sometimes called “growth rings.” Most frogs hibernate in the mud below the ice, though some survive the winter in their tadpole stage.

Many turtles also burrow into the mud and become inactive during the colder months. Snapping turtles, on the other hand, settle beneath plant debris and logs or even stay in muskrat or beaver burrows. Both snapping and painted turtles become active sometimes and can be seen crawling around under the ice. Cold-blooded toads, water snakes and garter snakes head under decaying logs, in stone piles, burrows or other holes and hibernate.

Do Fish a Favor: Stop Salting Your Sidewalks

How Fish are Making a Comeback in Montour Run